Conducted in January 2017, the results from the annual “New World Talent Survey” represent the collective views, opinions and inner-thoughts of over 600 C-Suite contributors across the media & communications industry, from all over the world.

PHD was named as one of the top brands of 2016, the only media agency named in the list which included Facebook, Google, ITV and Snapchat.

PHD’s worldwide CEO, Mike Cooper, was named one of the highest-ranking transformational figures in the industry whilst PHD UK’s CEO, Daren Rubins was named an outstanding leader.

A summary of the full report was published as below in M&M Global.

Despite a new report demonstrating a rising percentage of C-suite leaders claiming to be “fulfilled” by their role, the overall pictures implies this sentiment may be symptomatic of a wider desire to avoid “rocking the boat”.

While the continued increase in leader career fulfillment reflected by the Lighthouse Company’s 2017 ‘Shipping Forecast’ could be pegged to a more stable workforce, with 71% responding positively, 85% said they are considering making significant changes within their careers – a figure which has risen considerably since the previous year.

Also, 39% said they have considered leaving the industry, with 58% contemplating switching roles and 10% even thinking about selling up.

However, this disquiet has spurred the entrepreneurial spirit in some, with two in five considering setting up a company of their own. The report questioned whether this unsettled view is further driven by the uncertainty of one’s own position and lack of prospects.

Other findings in the report included a three-year decline in those wishing to join a “tech business” implying that it is no longer regarded as separate from the industry in general, as well as a four-fold increase in the desire to join an integrated full-service shop such as Havas village.

Leading the pack of companies that performed well (and that business leaders would be inspired to work for) in 2016, unsurprisingly, were Facebook and Google, despite also appearing at the other end of the scale of dominance with the likes of Twitter and AOL.

PHD’s global CEO Mike Cooper, meanwhile, was named one of the highest-ranking transformational figures in the industry, while factors like growth prospects, senior leadership and improved financial packages remained popular motivational factors, the only consideration showing consistent increase over the past six years was a greater work/life balance, at almost 29%.

Looking at emerging leadership patterns, the effects of relentless disruption have led to a trend for transformational chief executive officers, with highly valued traits like vision and authenticity, despite these behaviours largely believed to be absent in the industry. The capacity to learn, fail, course correct and experiment appears to have equally narrowed given pressures on growth.

The industry is also currently focused on fairness with diversity, inclusion and equality at the top of the agenda. However, the issue of age is under the spotlight, with more executives saying they will leave the industry younger and the question of the accumulation of legacy knowledge versus the barriers to older workers with modern skill deficiencies being a point of contention.

A final key leadership pattern referenced revolves around the importance of a clear purpose to drive performance, with 96% of respondents believing a clearly articulated set of values vital in attracting the best value. With this in mind, companies like Facebook and Google are attractive due to potential future growth, while organisations like BBC and The Guardian are also appealing due to showing a strong ethos and clear purpose.

According to the 2016 Mental Health at Work report, 77% of employees have been affected by symptoms of poor mental health, with 62% of employees attributing this directly to work or feeling work was a contributing factor. 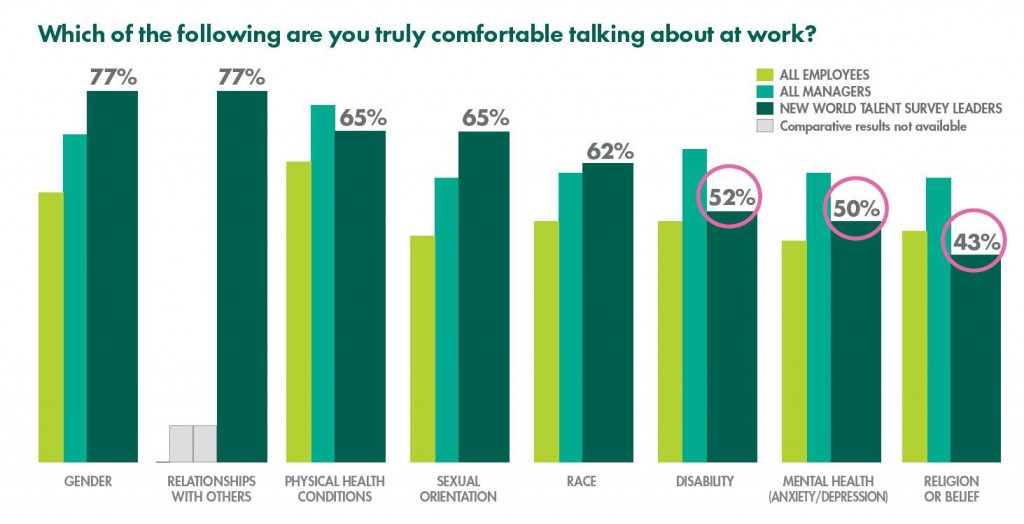 With that in mind, tackling the negative effects of poor mental health has never been more pressing. Despite this, the three topics which respondents were least keen to talk about in the work place were mental health, disability and religion, with only 52% feeling comfortable talking about disability.

While the report admitted to a workplace reticence when discussing mental health, there is no denying the conversation is getting louder.